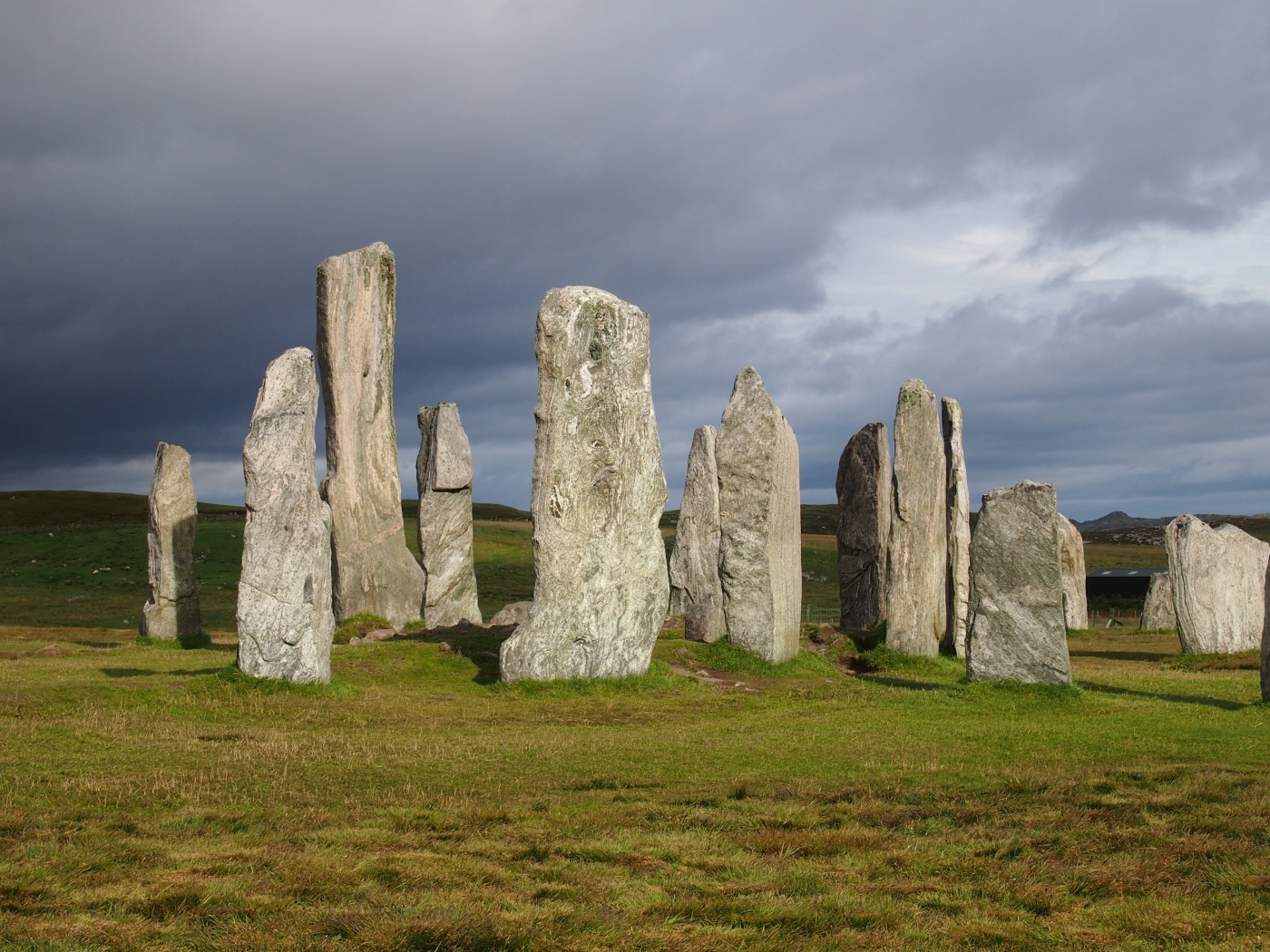 Fair warning: be prepared for lots of pictures! Scotland is amazingly photogenic, and I took advantage of the scenery and the bits of sunny weather we had in order to go a bit insane with my camera.

I was less than sunny the morning of the departure as I had made a grand mistake in booking the hostel I had used the night before. August in Edinburgh is known for something called “the Festival” and it should be known that this is really just a reason for the city to swell in size and accommodations to jack up prices. I took a chance on a new hostel, that didn’t use Hostelworld but rather Airbnb, and it was possibly the biggest regret of my trip. My room was filthy, there was no window, it was damp, it was noisy – oh the noise – I wiped down the bathroom before using it… it was so bad I even wrote an email to the owner. They also didn’t put me in the type of room I had booked, and there was nothing they were willing or seemingly able to do about it.

All that to say – yikes. Fortunately, that was the worst hostel of the trip (and one of the worst I’ve ever stayed in), and I had booked an AirBnb with a private room for my return to Edinburgh.

I was tired, but looking forward to heading to the Outer Hebrides on the Hebridean Hopper trip and getting away from the craziness of Edinburgh. Our guide/driver, Debs, quickly loaded us onto the bus, did a few last minute administrative tasks… and then we were off! She described what we were seeing in Edinburgh as we rushed out of the city, eager to head out on the open road. We passed what is allegedly “one of the sexiest bridges in the world,” the Forth Bridge, just outside of Edinburgh.

Our first stop was the charming little town of Dunkeld, home to Dunkeld Cathedral which houses the tomb of Robert the Bruce’s grandson, the Earl of Badenoch. There two elderly gentlemen acting as volunteers in the cathedral, and they suggested that we go back to check out the tomb but that, no matter what, we shouldn’t touch it. We dutifully returned to the small room, read the card, and then went back out where they told us, with a twinkle in their eyes, that there was a legend that if a woman was having trouble conceiving she should come touch the tomb of the Earl as it would increase her fertility! The stone was worn smooth, exactly where he told us it would be.

Our stop for a quick lunch was Inverness where we visited a massive grocery store. This is probably the cheapest way to eat lunch in the UK as for only about £3 you can pick up a sandwich, a pop or juice, and a snack (chocolate bars, chips, etc). We ended up doing sandwich lunches for three of the five days.

The road towards the ferry to Lewis and Harris was stunning, with high hills and lots of greenery, but very twisty. I ended up dozing off, as did much of the bus, and this became a recurring joke throughout our travels as Debs tried to figure out why we kept passing out. We did take another stop, to gaze down a ravine at a stream and some waterfalls, complete with a trip over a rickety bridge where only six people were allowed at a time. Three cheers for Scottish engineering?

We had some time to kill while waiting for the ferry, so we visited the town of Ullapool, picked up a few snacks, and stopped into a local pub for a pint. The UK is very mature about drinking in public, so we all took our pints and headed across the road to sit on a seawall and gaze out at the sailboats and fishing boats that were anchored in the bay. Due to some strange intricacy of ferry boat rules – and as a fairly experienced Marine Atlantic traveller, I know how ridiculous ferries can be – we had to walk on, while Debs drove the bus on alone.

I’m going to compare this ferry a bit to my experiences with Marine Atlantic. This ferry was new and modern, much like the newer Marine Atlantic ferries, and while there was plenty of room to sit outside the rather soggy Scottish weather didn’t necessarily make it a pleasant place to spend a lot of time. Unlike MA, pets are allowed in the passenger area of the ferry and there is special “pet friendly” seating space. There were plenty of luggage racks, so that you tuck your suitcases away, and there was even a casino on board if you wanted to drop a few pounds into the one armed bandit. Finally, and perhaps most importantly, the Scottish ferry system’s restaurants and bars do not gouge the travellers. Marine Atlantic operates on something similar to movie theatre, or arena pricing, while the Scots seem to view the ferry as the essential service that is and charge prices similar to what you would find onshore. A pleasant surprise!

Our hostel in Stornoway, and our home for two nights, was the Heb Hostel. This was a family run hostel, and the woman who ran it did her best at making us feel comfortable. When I booked accommodations I was told that we would normally be in 4-6 bed dorms. The dorm that the girls were assigned, meanwhile, had 9 beds – a few more than I had expected, but it was only for two nights. The hostel itself, however, was quite old and we were told that it was built over 200 years ago and while the front sitting room was a fairly cozy place to sit and meet other travellers, there were a few tradeoffs: the wifi was mediocre, at best, there weren’t really enough bathrooms or power outlets, and every bit of the building creaked and groaned with any movement. If they had private rooms it could be a great place to disappear to for a while since you have the best excuse for not responding to e-mails! The absolute highlight of the hostel, however, is probably the bathroom that is off the ladies dorm – clawfoot tub, big windows, sinks, a great shower… and it was spotlessly clean.

The very first stop the next morning was the grocery store, where we all ran in for the day’s provisions. We were off to the Callanish Standing Stones, the oldest set of standing stones in Scotland. After a short walk up a hilly path, we were there. Unlike Stonehenge, which was off limits to visitors when I went back in 1995 (and is apparently even less visitor friendly now), you could get quite close to the stones. Debs recommended that we all spend a few minutes with our backs to the stones, trying to feel their power. I felt no power. I didn’t even see Jamie Frasier (I know, I know, there just had to be an Outlander reference).

They have limited understanding or knowledge of the stones, similar to Stonehenge, and they’ve done some studies that show quite a bit of the stone is buried underground. This makes the entire thing even more of a mystery because the scale of the work that would have had to be done, in terms of carrying, burying and measuring the circles, would be even more daunting with such limited technology. I was also really surprised to note that there were other, smaller circles in the area – we passed one such smaller circle en route to the big one – and that you can do a relatively short hike between them.

Once we managed to drag ourselves away from the stones, we headed towards Dun Carloway, a broch that dated back some 2000 years. Once again, we climbed up a hilly path, trying to avoid sheep droppings, to the ruins. The wind was incredibly strong and we all wondered aloud why, except for defensive reasons, someone would be crazy enough to build their home in the path of these brutal winds. Once we were in the ruins, however, the wind had completely disappeared and it felt a few degrees warmer. Maybe those Scots from two thousand years ago were onto something! You could climb in and around the broch, but I peeked my head inside, saw the narrow walls and quickly beat a hasty retreat.

Off we were to the Gearrannan Blackhouses! Entrance for this attraction was included in the pre-paid package, otherwise it would have cost around £4. These are traditional homes, the last of which were inhabited into the 1970s, that were very much a way of life in the Outer Hebrides. Traditionally, people lived in one side and the animals lived in the other, with a peat-fuelled fire keeping everyone warm during the chilly winters. There was a rather cranky man doing tweed demonstrations and while it was interesting to see how it was done, the explanatory video in another part of the compound was much easier to understand.

We ate our picnic lunches by the sea, sheltered behind a breakwater, before heading off to the Butt of Lewis and the stunning scenery. We wandered around the cliff edges, avoided more sheep poop, and took a lot of photos with the lighthouse in the background. Many from the group were also eagerly watching the water, finally catching a glimpse of a seal bobbing around.

From there, it was back to Stornoway where we all went our separate ways. I wandered the town for a bit, checking out some of the shops and taking a few photos, while some went straight to the bar. I ended up tagging along with an Australian couple for dinner, enjoying a meal of Thai food (yes, Thai food). It was recommended by Debs, as the restaurant was stated to be a good value and had a BYOB wine policy, and her recommendation was spot on as both the food and service were excellent. The restaurant was buzzing, which made it pretty clear that the secret is out.

A few pints and then early to bed as we had another busy day of exploring to come, plus another ferry ride, and would be spending the next night on the Isle of Skye where we were promised a visit to a pub with great traditional music!